One year following the demise of Zeref and Acnologia, Natsu Dragneel and his team from the Fairy Tail wizard guild embark on the 100 Years Quest, a mission that has been unaccomplished for over a century, on the northern continent of Guiltina. There the team learns that their mission is to seal the Five Dragon Gods, a group of Dragons whose power threatens to cause worldwide destruction. Meanwhile, Fairy Tail recruits a new member named Touka, who is possessed by a witch that aims to seize the Dragons' powers for her own purposes.

The sequel manga is divided into arcs as followed:

Illustrated by Atsuo Ueda with the storyboards provided by Hiro Mashima, "Fairy Tail: 100 Years Quest" is the official sequel manga that was serialized in Kodansha's Magazine Pocket web application beginning from July 25, 2018. The individual chapters had been collected and published in a tankōbon volume by Kodansha, with the first being released on November 9, 2018. There are currently 103 published chapters in total.

The series was licensed for an English language release in North America by Kodansha USA in March 2019, with the 1st volume released in August 2019.

Chapters Not Yet In Tankōbon Format 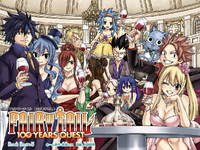