It is a magical, armored, mechanical Dragon that is forbidden from use under the 23rd-Article Imperial Constitution of Edolas Kingdom. In the native language of Edolas, Dorma Anim means "Dragon Knight".[1]

Dorma Anim is an extremely powerful Dragon Armor that constantly drains all the Magic Power from the planet in order to maintain its power. Because of this, Faust declared that once it's activated, it must win for the sake of Edolas. However, what truly makes Dorma Anim deadly is the fact that it is equipped with a special alloy that can nullify all Magic used against the armor, rendering just about all Magic attacks useless.[2][3] However, Dragon Slayer Magic is the only exception since they can damage the mechanical Dragon because of their abilities.[4]

Dorma Anim's requirement of residual Magic from the planet as fuel would mean that in an atmosphere absent of Ethernano, the mecha would most likely be rendered inoperable.[2] 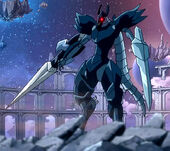 Retrieved from "https://fairytail.fandom.com/wiki/Dorma_Anim?oldid=1005536"
Community content is available under CC-BY-SA unless otherwise noted.