Darkness Magic (闇の魔法 Yami no Mahō) is a Caster Magic which utilizes the element of darkness.

Darkness Magic is a type of Magic which allows users to manipulate and control Darkness for various effects. This Magic has a form that can be used for destroying objects, blocking enemies' attacks and picking up objects.[1] The color of the Magic varies depending on the caster (red, purple, black, green, etc.).

Like other elemental Magic, this Magic includes body transformation. Users such as Simon control the surrounding darkness and shadow, engulfing others and the immediate vicinity into its pitch-black darkness, themselves included.[2] The element can also be crafted into many different shapes, including, but not limited to, beams and the like, which the user typically shoots at their foe in an effort to mortally wound them.[3] Additionally, the user can warp their Darkness Magic into the form of a shield to protect themselves from oncoming attacks.[4] 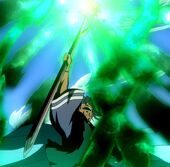 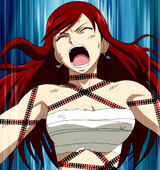