Crush ( Kurasshu) is an extremely powerful Caster Magic that allows the user to break that with which they come into contact.

It is a very advanced Magic which gives the user the ability to smash everything they come into contact with. If the user is unfocused, they may destroy objects such as houses unintentionally.[3][4]

Crush has various offensive and defensive properties. Using its inherent nature of being able to crush anything it comes into contact with, the user is able to nullify the effects of certain Magics by smashing them to pieces,[5] occasionally exemplified by the crushed substance, be it Magic or otherwise, becoming separated into numerous cubes. However, should Crush be directly cast on another living being, the target splits apart and becomes reduced to numerous, doll-like versions of themselves. This effect is not permanent, and the affected will, with time, return to their original shape. However, should the user wish, they can reassemble the divided person with a simple motion.[6]

By imbuing their fist with Crush, the user is able to send an enemy flying numerous meters with incredible force.[7] It is also capable of being fired as a burst of energy at the opponent. This Magic can also be utilized effectively as a defensive means. For example, by crushing the ground underneath them, the user is able to create a cushion of sorts against enemy attack.[8] It is also possible for Crush to be used as a deflective barrier, sending an assailant flying backwards when they come into contact with it.[9] 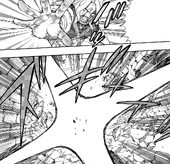 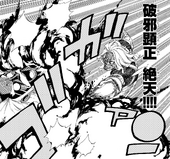 Retrieved from "https://fairytail.fandom.com/wiki/Crush?oldid=961492"
Community content is available under CC-BY-SA unless otherwise noted.