Arc of Time (時のアーク Toki no Āku) is a Caster-Type Ancient Spell and Lost Magic and type of Time Magic that involves the usage of time as a means of combat.

This Magic revolves around the manipulation of the "time" of objects of non-living things[1] and non-sentient living things, like a tree.[2] The user can fast forward an object's "time" into the future, making it decay rapidly or rush to attack an opponent.[3] This Magic can be even used to stop an object's "time" by freezing it in midair.[4] The user can also rewind a damaged object's "time" to restore it to its original state, like turning ice back into water.[5] Mages who use this Magic can produce "bubbles" of time that show the various potential things that the item could do and then pick one of the timelines whenever they want to.[6] This Magic is said to be the natural enemy of Molding Magic Mages.[7] Despite not working on sentient beings,[4] this Magic has been shown to be able to affect humans to some degree by using it to evolve Mages' containers of Magic Power so that they're capable of using their Second Origin.[8] 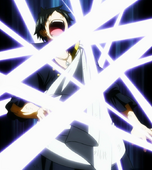