Air Magic (空気魔法 Kūki Mahō) is a Caster Magic and Holder Magic that utilizes the element of air.

Air Magic is a Magic which gives its user the ability to manipulate the air around them and use it as a weapon, such as making it explode or lowering the oxygen levels in a certain area.[3] The air can also be manipulated in simple ways, such as using it for levitating, or keeping a giant airship, like the Magic Bomber: Christina, airborne after being heavily damaged. However, this consumes a large quantity of Magic Power.[4]

Like other elemental types of Magic, some users can also transform their bodies into this element. The only characters seen to be able to do this are Aria and Mystogan by turning their bodies into air to negate both physical and magical attacks, or to teleport to another location.[2][5] 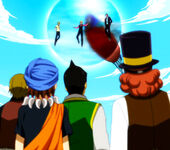 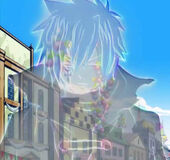