The restaurant is located in the port town Hargeon, which is located near Magnolia. Later, Yajima opened his second branch in the town of Magnolia itself.[1]

The restaurant was founded by Yajima, a former member of the Magic Council. Yajima retired from the Magic council, after the events that transpired during the Tower of Heaven arc, when the Council launched Etherion to annihilate the Tower of Heaven, but it was revealed that the situation was manipulated into Jellal's favor, and Ultear Milkovich, who was then manipulating Jellal Fernandes, destroyed the Council headquarters with her Arc of Time Magic. Yajima occasionally contracts Mages to assist the restaurant as waiters/waitresses.[2]

The food served in this restaurant is Magical in nature. Among other things on their menu, there are also: 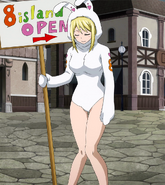 Retrieved from "https://fairytail.fandom.com/wiki/8-Island?oldid=953099"
Community content is available under CC-BY-SA unless otherwise noted.